About the Asheville Symphony Chorus

​Every season the chorus performs with the Asheville Symphony Orchestra and presents its own independent concerts, focusing on both the classics and modern choral ensembles written for a classical music audience. Its performances often involving musicians from the Symphony Orchestra. Along with these concerts, during the holiday season, we have sponsored a Sing Along of Handel’s Messiah, performed “Flash Mobs” at multiple locations around the Asheville area, sponsored by The Chaddick Foundation.
We have sung for the lighting of the Christmas Tree at the Grove Arcade in downtown Asheville, which kicks off the Holiday season.
For its first 20 years, Tipton meticulously prepared the chorus for annual Symphony Masterworks performances, the December Holiday Pops concerts, and a concerts produced and performed solely by the Chorus. This tradition of musical excellence and meticulous preparation continues under the direction of Dr. Michael Lancaster, who began his association with the chorus in July 2011 as Guest Conductor. He assumed his duties as permanent Music Director and Conductor of the chorus in July 2012. John Bridges’ review of December 16, 2012, states: “... the large chorus responded to the many melismatic portions with clear and secure voices which were faithful to the period and which reflected solid preparation under the direction of Dr. Michael Lancaster.” Dr. Lancaster has continued to elevate the musicianship and sound of the chorus over the last 10 years.

​For more than 30 years, the chorus has presented the best of the choral masterpieces,often in powerful performances withthe Asheville Symphony Orchestra,  with consistently positive reviews such as the following: “The Asheville Symphony Chorus delivered a stunning “professional sound” (The Classical Voice of North Carolina, 2007). The Chorus has also reached out into the community with new performances. The group has performed major classics including the Verdi Requiem, Beethoven Mass in C Minor and the Ninth Symphony; Brahms’ Requiem; Vivaldi Gloria; the Durufle Requiem; and Handel’s Messiah and Alexander's Feast; Mozart's Requiem, Mahler's Symphony No.2;and Holst's the Planets. More contemporary composers are featured in the programs as well: Lux Aeterna by Lauridsen; Carmina Burana by Orff; Ola Gjelio Sunrise Mass; the Poulenc Gloria; Vaughan Williams’s Five Mystical Songs and Sea Symphony; Mass of the Children by John Rutter; and the world premiere of Stephen Paulus’ Heritage Songs. The Asheville Symphony Chorus enjoys collaborating with other performance groups in the area. .

​In April, 2017,we joined voices with the Asheville Choral Society, in concert “Light and Life” of contemporary American Music.  Following our joint concert with the ACS, members from both groups took a performance tour to Austria and Prague. We have collaborated with the Middle School and Youth Chorales from the Academy for the Fine Arts at First Baptist Church in concert. 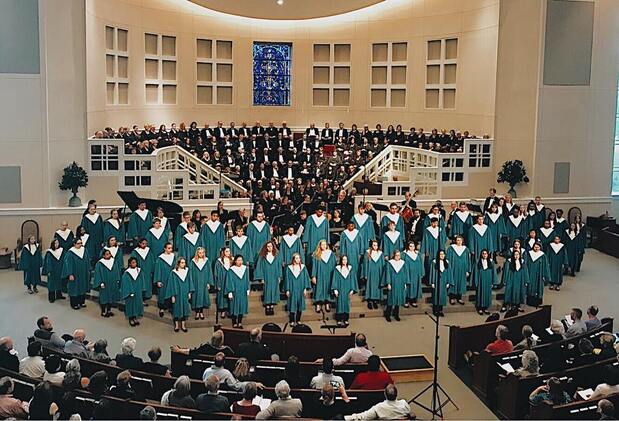 The future is bright for the Asheville Symphony Chorus, with strong performances, continual recruitment of members, and outreach in the Asheville area. We invite you to contribute to us, listen to us, or sing with us; and we appreciate your participation on all levels.