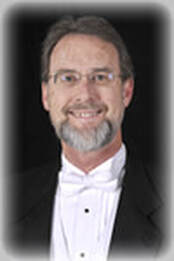 Dr. Michael Lancaster, Music Director & Conductor
Michael Lancaster was appointed Music Director of the Asheville Symphony Chorus in the fall of 2012. In this capacity he prepares the ASC for performances with the Asheville Symphony Orchestra as well as independent concerts. He formerly was the Director of Choral Activities in the School of Music at Western Carolina University, where he conducted the Concert Choir, University Chorus and Early Music Ensemble and taught conducting, choral methods and voice.
Dr. Lancaster serves as Director of Worship and Music at First Presbyterian Church, Highlands, NC. In April, 2018 Dr Lancaster was appointed as the Conductor and Artistic Director of the Carolina Concert Choir, Hendersonville, NC.

In the summers of 1980 and 1981 Lancaster studied conducting at the Oregon Bach Festival under renowned conductor and Bach scholar Helmuth Rilling. Since then, he has sung in the Festival Chorus of the Oregon Bach Festival many times, singing incidental solos on a few occasions. In the summer of 1988 he was selected from applicants across the country as one of sixty singers to sing under the direction of Robert Shaw in Souillac, France in the “Robert Shaw Festival Singers.” He was asked to return in 1989, 1990, 1992 and 1996 as well. He also participated as a member of the paid professional core in the “Robert Shaw Choral Workshop” in November 1990, which culminated in a performance of Ein Deutsches Requiem by Brahms in Carnegie Hall with the Orchestra of St. Luke’s and soloists Sylvia McNair and Samuel Ramey. He was invited to participate in the same capacity in the“Robert Shaw Choral Workshop” and the “Carnegie Hall Choral Workshop” many times in subsequent years. Lancaster has participated as a chorister on several recordings, including the Grammy Award winning Credo by Penderecki with the Oregon Bach Festival Orchestra and Chorus conducted by Helmuth
Rilling; Amazing Grace and Brahms: Liebeslieder Waltzes with the Robert Shaw Festival Singers conducted by Robert Shaw; and Britten: War Requiem with the Atlanta Symphony Orchestra and Chorus conducted by Robert Shaw.

He holds the BME from Chapman College (Orange, CA), MM from California State University Fullerton and DMA from the University of Southern California. His wife, Dr. Linda Lancaster, is a free-lance flutist who is a member of the Brevard Philharmonic Orchestra. They have two children, Kevin and Katherine. 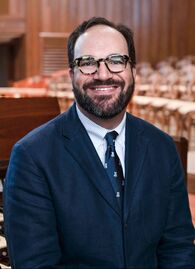 ​Active as a church musician from an early age, Tate has held positions at New York City’s Brick Presbyterian Church, at Second Presbyterian Church in Kansas City, Missouri, and at the Yale Berkeley Divinity School in New Haven, Connecticut. Currently, he serves as organist at First Baptist Church in Asheville, North Carolina where he collaborates with the Minister of Music in a comprehensive music program, presents a series of monthly organ recitals, and teaches organ and piano in the church’s Academy for the Arts. He also serves as Assistant Director and Accompanist for the Asheville Symphony Chorus.

Tate Addis received the Bachelor of Music degree from Wichita State University, the Master of Music degree from Yale  University, and the Artist Diploma from Oberlin College. His principal teachers were James David Christie, Lynne Davis, and Thomas Murray. Additional studies were with Marie-Louise Langlais and Roman Summereder. Tate, his wife Laura, and their pet pig Virgil make their home in the mountains of western North Carolina. 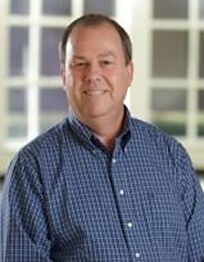